Definition Of Radius Of Curvature

Definition Of Radius Of Curvature

The radius of the circle formed with the curved part of the lens is known as radius of curvature.

We draw a circle with the help of the curved part of the lens, and locate its centre, by measuring the radius of the circle from the centre we get radius of curvature. . 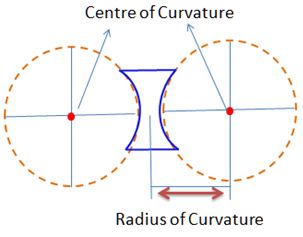 As the lens contains two spherical surfaces it will have two centers of curvatures, A line joining these two centres and passing through the optical centre is called principal axis.

Aperture is the effective of width of a lens through which refraction takes place.