Change in position of an object with respect to time.

A moving object changes its position as the time passes/changes.
In general motion is described as the movement of object.
Objects which are moving will not be at a same position after certain interval of time.
When the object remains at same position after certain interval of time then the state of the object is known as "rest".
Examples of objects in rest and motion

Change in position of an object with time is measured with the units of distance.� It describes the speed of an object.� (How fast or slow an object is moving.)
General types of motion: Circular motion, Periodic motion, rectilinear motion.

Sam participated in a sports event. In which he has to cover the circular ground for 3 times and he completes his first round in 5 minutes, the second round in 3 minutes and third round in two minutes. Which type of motion was covered by him? And in which round he moved very fast.

A. Periodic motion: 2nd round
B. Translatory motion: 1st round
C. Circular motion: 3rd round

Which of the given example is in Periodic Motion? 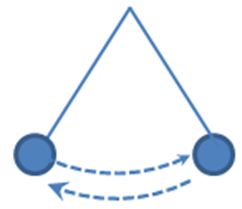 A. Horse riding in a race
B. Simple pendulum of a wall clock
C. Motion of a giant wheel.
Correct answer is B