Regrouping is reorganizing the formation of the group

Regrouping is used to assist while performing addition and subtraction

To subtract 9 from 25, we first arrange the blocks and then divide one of the tens blocks in ten unit blocks 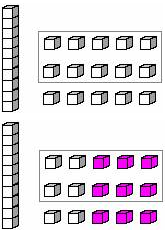 The filled blocks are 9 as they are to be subtracted.

Ques: Mathew collected 120 postal stamps. He gave 13 to his friend. How many stamps was he left with?